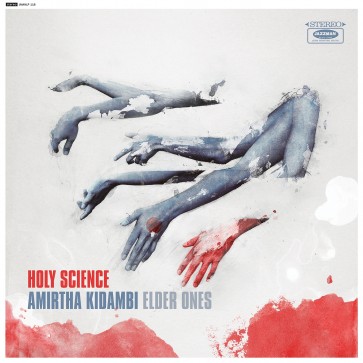 First released on digital formats back in 2016, and here now given a richly deserved full vinyl release, ‘Holy Science’, the debut outing from Amirtha Kidambi and her New York based quartet The Elder Ones, is a work of dazzling singularity. Delicately yet unashamedly divulging its complex network of influences at every turn, ‘Holy Science’ simultaneously disperses of boundary and limitation, emerging as an album steeped in tradition yet located firmly in the futuristic present.

Amirtha Kidambi, the Elder Ones’ leader, composer and vocalist, was a child of South Indian heritage, and she grew up immersed in the tradition of devotional singing, joining in with free-form, improvised Bhajans on regular Sundays. She began simultaneously accompanying her voice with the harmonium from the age of three. These formative experiences continued to instruct and merge with her ongoing musical explorations as she went on to study Classical music, all the while ingesting the Punk, R&B and Rap that surrounded her. A particularly significant discovery was that of free and avant jazz, and in particular the music of Alice and John Coltrane, in whom Kidambi found clear echoes and parallels with those Bhajans and Ragas of her earliest musical awakenings.

All these influences collide on ‘Holy Science’, at times as explosive blasts of sky-opening thunder, at others as moments of soothing, meditative bliss. These holy bursts are enacted by Kidambi’s assembled musicians and are given permission to explore the science of spiritual alchemy, plundering their individual and collective soul for the sake of musical expression, and all of the unpredictable and profound revelations such an approach might yield.

‘Holy Science’ is a work underpinned by traditions, be they the Bhajan spirituals, or the Jazz and Classical avant gardes, that are in their own manner, archetypal. But perhaps most importantly, all of these forms contain an inbuilt capacity for discovery and progression. Amirtha Kidambi’s musical pathway has been defined by a studied determination to occupy this specific space, the unbounded realm of improvisation and exploration, summoning the acquired instruments of experience, knowledge, culture and tradition to unlock secrets of the past, present and future. The most cherished music is often remarked upon as having a timeless quality – ancient, modern and futuristic, all at once. And so it is with ‘Holy Science’.