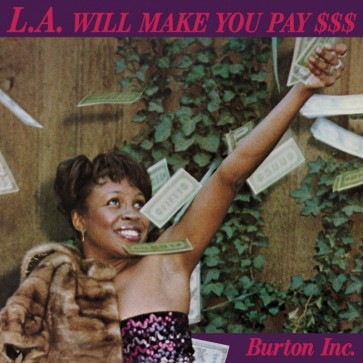 L.A. Will Make You Pay

In the '70s radio stations were a powerful force across the whole of the US, and anyone with a transistor radio had access all kinds of music. Live music was another matter altogether, and unless you found yourself in a major city your nights out were limited to what the local talent had to offer. This was especially so with soul and funk acts, as mainstream rock and pop was where the money was.

So for small time Oklahoma soul bands such as husband and wife Charles and Barbara Burton's groups "Messengers Inc" - and later "Burton Inc" - times were tough. However, like many purveyors of soul, tough times were no match for those with determination, persistence and a story to tell. Many artists scraped enough money together to make a 45 or two on their own label; but the Burtons took this to another level - they got themselves organised and released their own full length LPs.

With these two albums we tell the story of the Burtons and their contribution to 1970s Midwest funk and soul. Their dreams and desires, struggles and setbacks are all set out in our extensive liner notes, complete with previously unseen photos of the bands.

But above all here are two albums chock full of good music - Messengers Inc from 1972 with heavy funk & deep soul, Burton Inc from 1976 with soulful disco and boogie, including the rare title track dancefloor favourite 'LA will Make You Pay'.

- Comprehensive liner notes from our interviews direct from the band

- Most tracks never before available outside of their super rare expensive originals!

- Only on Jazzman – all because WE DIG DEEPER!