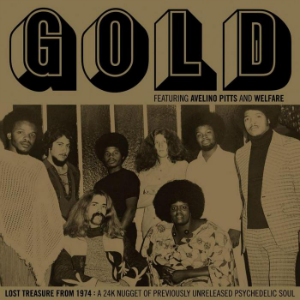 The original plan was rather more straightforward. Jazzman Records had intended simply to license the masters for the obscure ’77 Cali funk-soul single “What About The Child”, credited to otherwise unknown outfit Gold, for a direct 45rpm reissue.

And so began the search for the men behind this lavish, expansive soulful spin, the men who were Gold. Writer and producer Avelino Pitts was taken aback on first contact, but duly set about the not-so-simple task of locating and delivering these thirty-five year old tapes. “I dug around, I started going all over and asking, and nobody knew where this was” Pitts remembers. “And, no one - the studios, my brother - nobody had a copy of a tape. But my father had a shed in the back. Now this is in Las Vegas - not air conditioned - and this is a shed. And [after] all of these years of hundred-plus degree weather, he said, ‘why don’t you take a look in the shed?’ So I’m digging through boxes, covered in dust, spiders, and I come across this box of tapes!”

And from those very tapes comes this long-awaited album! Unheard by human ears since 1974, this is the super sound of psychedelic soul, dancefloor funk and soulful ballads astonishing for their power and beauty. It’s incredible to find out that for one reason or another this album was never released at the time, and in our interviews and liner notes we reveal the fascinating story behind the band and why such good music has been kept in the dark for so long.