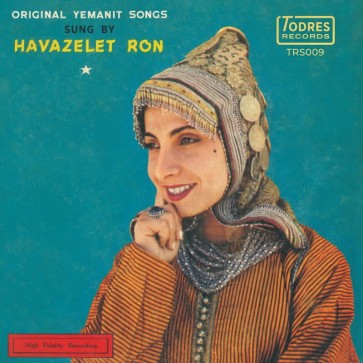 Havazelet's story is both fascinating and mysterious. She was born in Aden, Yemen, in 1936 as Havazelet Damari, she immigrated to Israel when she was 8 years old and grew up in south Tel Aviv. Havazelet discovered her love for singing when she was a teen, when she would sing at feasts and family events. In March 1960 Havazelet Ron's only Israeli album, 'The Music of the Desert' was released, produced by the Makolit label, featuring Yemenite folk songs. Both songs on this 7" are from that album. The album's recording date and location, and the identity of the musicians, could not be found.

The album was ahead of its time in that it introduced an innovative sound, comprised of drums, electric guitar and an organ, making it one of the first albums in Israel to record this type of composition. However, it confused the Israeli audience of the time: The vocals were in Yemeni-Arabic, preventing it from being played on the radio, which mainly played Hebrew music, moreover, it was too innovative and far from traditional music for the Yemenite scene. The album fell between the cracks and her big breakthrough to mainstream did not happen.

In Israel, her name is almost unknown among music lovers in general and among record collectors in particular.