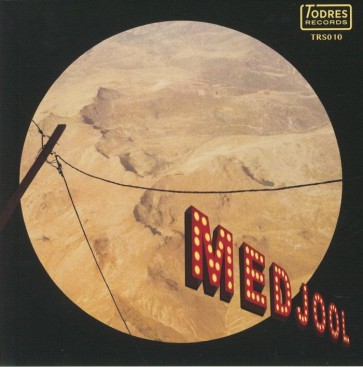 Medjool's story starts in 2010, at Samar, a Kibbutz in the Arava valley in the far south of Israel, based on a unique, hippic and cooperative community. The band's four members met and lived there after their Military service. Being surrounded by musicians they started jamming together a lot, finding a joint creative language.

In 2011, three of them – Ori, Nur & Aviram, moved to Tel-Aviv, trying their luck in the big city. Gilad joined them In 2013 and the four friends became Medjool. The next three years were hectic with shows all over Israel, from small clubs to big festivals, gathering loyal crowd which followed the band everywhere.

The 7" two tracks, recorded in 2015, are the only music the band recorded professionally. Nowadays, the band's members turned their energy to other musical projects, saying "we only took a short break which we're not sure when it'll end".
'Gbells' & 'Savana' are two energetic wild Afrobeat tunes. The fact that the rhythm section comprises of a double base and percussion, grants Medjool its unique highlife, groove colour. The guitar and saxophone travel through middle eastern to Ethiopian melodies, suggesting the listeners the option either dancing or riding a camel in the desert, on your way to a flush oasis.