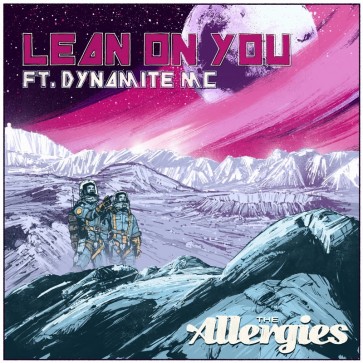 Lean On You (feat Dynamite MC) b/w Working On Me

Despite the troubles globally faced in 2020, it's safe to say that The Allergies bucked the trend and came back by ultimately having a rather glorious year. Releasing their fourth stu-dio album, achieving the 'A List' on BBC Radio 6 Music and Radio Eins in Berlin, climbing high in the NACC US college charts, and generally receiving critical acclaim from a world that had an understandable appetite for some joyful and fun music in their lives.

2021 shows no signs of things slowing down. The heat continues for their 2020 album Say The Word with Pioneer, Liptons and IAMS all taking Allergies tracks for their global advertis-ing campaigns. Rather than rest on their laurels, though, the guys went full lockdown crea-tive and have their fifth album due for release in September, 2021.

"Jumping Off" was the first new track from the album to be debuted at the end of 2020 – A self-sampling version of their 2018 track "Main Event". As with all Allergies tracks of late, the limited 7" release caused a Discogs feeding frenzy.

Now, The Allergies power forward with the first single of the 2021 album campaign – An absolute dancefloor destroyer featuring legend of the mic, Dynamite MC, entitled "Lean On You".

The Allergies first hooked up with Dyna on previous album Say The Word for the fan favour-ite "Hot Sensation". But, scheduling clashes with Dynamite's own album release meant that a single outing for that track was not possible.

No such issues this time round means The Allergies kick off their 2021 album with a serious club and radio contender to move things to the next level.

It's a stylistic new lane for the Bristol-based beatmakers. Their trademark heavy drum chops now flowing on half time tempos, with blues guitars riffs front and centre. The perfect back-ing, then, for the UK rap legend to find his theme and raise the roof.

The 7" is backed by "Working On Me" – A classic Allergies-style screamer with a taste of funky swamp rock, updated for your favourite dancefloor/kitchen/outside space, with five other people…