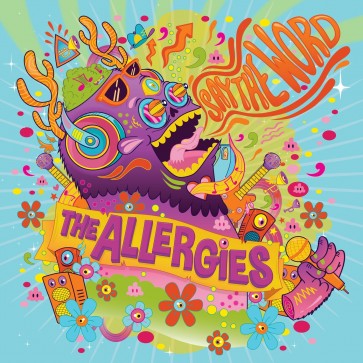 Off the back of the inescapably addictive funk rattle 'n' romp 'Felony', an A-list playlist choice of BBC Radio 6 Music spun by Craig Charles, Lauren Laverne and Mary Anne Hobbs as well as BBC Radio 2 hosts Jo Whiley and Rylan, The Allergies are out to provide the soundtrack to your summer with 'Say The Word'. The Bristol duo of Rackabeat and DJ Moneyshot continue their patent blend of fat laced hip-hop and funk for the hip bone, ready and waiting to tear the ring pull off so the party can flood out.

In succession to 'As We Do Our Thing', 'Push On' and 'Steal The Show' ("An action-packed funk workout that delivers dancefloor A-bombs time and time again" – Clash magazine), 'Say The Word' packs a killer punch of chunky breaks, finger licking throwdowns and soft-shoe steppers to ensure the boogie will never leave your body. The Allergies' latest dancefloor crusade lines up serial collaborator Andy Cooper of Ugly Duckling (now officially seeking official Allergies citizenship, and reaching a new astral plain on 'I Just Got That Feeling'); the honey-dipped, no-nonsense soul of Marietta Smith, of Smith and The Honey Badgers; Dynamite MC holding down the uber true skool cool of 'Hot Sensation'; and the funster Mardi Gras free for all involving The Cuban Brothers that will definitely 'Let Them Know'.

A fixture on Jalapeno Records since 2015, The Allergies all-in party performance has gained Album of the Day status on 6 Music, become a bestseller on the iTunes and Juno hip-hop album charts, and received Tune of the Month gongs in Mixmag. The Allergies have also stopped by shows on Radio 2 with Dermot O'Leary and Radio 4 with Clive Anderson, and headlined the BBC 6 Music Festival in their native Bristol; all in addition to an ever energetic European itinerary, and teaming with Dr Syntax (whose dulcet tones are back to affirm 'I'm On It'), Izo FitzRoy and Uncle Frank of the group, the Fun Lovin' Criminals.

In tandem with 'Felony' flying across springtime airwaves, Rackabeat and Moneyshot helmed a triumphant Trunk of Funk mix for Craig Charles' celebrated Funk and Soul show in April. It got pulses racing, as per usual, and whet the listeners' appetites for album number four. When it drops, trust us, 'Say The Word' will be on everyone's lips.