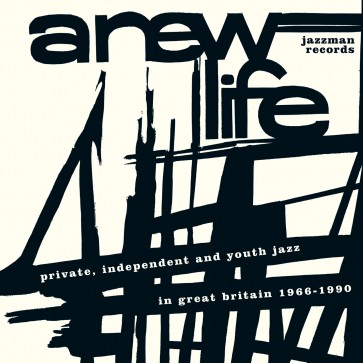 Thought you knew about British jazz? Think again. Diving into the unknown world of the private pressing, Jazzman Records presents some of the rarest and wildest British jazz ever recorded!

The major stars of British jazz such as Stan Tracey, Michael Garrick and Joe Harriott are now rightly recognised as the giants they were, and the legendary

Brit jazz recordings of the 1960s are amongst the most highly prized of all collectable records. But what happened to jazz in the UK when the recording industry lost faith in it? A New Life is the first survey of British jazz labels and musicians that went their own way in the 1970s, bringing to the light the unknown indie gems and outsider private pressings that let jazz musicians keep the faith into the 1980s. From the time-bending spirit music of London’s Lori Vambe to the psych-jazz of Birmingham’s Poliphony, via Spot The Zebra’s jazz dedication to David Attenborough and Indiana Highway’s modal Christmas carolling, A New Life chronicles a compelling selection of lost and obscure jewels of the British jazz underground.

Compiled by Francis Gooding and Duncan Brooker (the team responsible for the acclaimed Next Stop Soweto series), and coming with extensive sleevenotes based on interviews with the musicians, A New Life is the first major British jazz collection since Gilles Petersen’s Impressed series, and the first ever to shed light on the forgotten legacy of independent, regional and experimental Brit jazz.