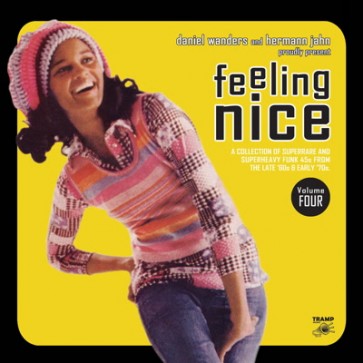 Tramp's Feeling Nice series has positioned itself as a universally accepted essential cultural and historical document of some of the greatest unknown local vernacular American Black music of the sixties and seventies. The Feeling Nice series has been dedicated to filling in the blanks between the more well known cuts of so-called Deep Funk canon and drawing out the relationships and stories behind and between the tunes and the artists, and ultimately creating a dialogue that serves to enlighten and enliven a true anti-racist discussion of American Popular music specifically and of Global human music in general. With Feeling Nice Vol. 4, Tramp continues this important conversation, and having spent over 700 days unearthing a rousing selection across the board, offers it to you, now, as a double LP with full-color label scans, never before seen promo shots, and detailed biographical information - in some cases in the words of the artists themselves!

As a special incentive for you to be first in line for this freakishly fantastic funk feast, Tramp Records will include a special BONUS 45 of an unpressed acetate of "I FEEL A GROOVE COMIN' ON" by "SOUTH SIDE" with the first 400 copies of Feeling Nice Vol. 4.